LADIES and GENTS! A NEW VERSION OF Getting Cheated On has been released! Every Saturday, I release or recirculate a stand-up clip of mine! There are always one minute long because we all know... -you got shit to do -You got chick to swipe right to -Comic books to read -sports to play/watch -crimes to commit...I won't snitch -and hell to raise! So without further ado...HERE

Bombs Away: The trial and errors of new jokes!

This is literally how I feel when I approach an open mic stage. Strolling up to the stage with a crushed napkins in my pockets that ink stains that resemble new jokes. "Jessssseee HUBERRRRR" the host roars I walk on stage Open mics are by far my 2nd favorite part of comedy. The first would be killing a feature set at a comedy club! For the next few months, I will be on my BOMBS AWAY show cycle. This is where I am constantly trying new jokes at an open mic, regardless of my f

When I went on Facebook A.K.A my procrastination paradise, I shouted "NO!" The first thing I see in my newfeed is that Don Rickles had past away at 90. Growing up, I was raised on comedy from Chaplin, Three Stooges, Mel Brooks, Carson, and more before being introduced to comedy more commonly seen today. While watching a Youtube video of Carson, I discovered Rickles. He was being mean and everyone loved it. If I would say one mean thing, my mother would send me to my room. But 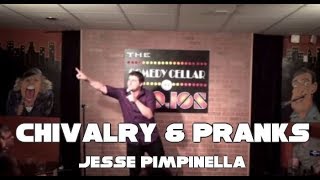 Happy April Fool's Day! Here are a few classic pranks to start your festivities! 1) Joy Buzzer 2) Whoopie Cushion 3) Tell your boyfriend that you are pregnant! Okay, maybe the third one is a bit out of line! Here was a time one of my pranks went awry.